Rebecca Gilbert is called The Weed Lady because the plants have nurtured, nurtured and cared for her from a young age on the vineyard. And today, as she walks the fields of Native Earth Teaching Farm in Chilmark where she lives, she still talks to plants that are descended from those she talked to and ate as a child on that same plot of land in North Road .

“I consider weed very dear friends,” she said in a recent interview with the Gazette. “They give me free advice, as friends often do. I listen sometimes. I feel like we have a relationship and that’s something I appreciate.

Over the past two decades on the farm and around the island, Mrs. Gilbert has shared her experience of observing, talking, listening and harvesting plants. Soon, this wisdom will reach a wider audience. Weedy Wisdom for the Curious Forager, his long-awaited book of practical plant knowledge, is published by Llewelyn Press and will be available later this summer. The book grew directly out of the workshops she held with Camp Jabberwocky, but also includes wisdom and recipes learned through practical life.

Mrs. Gilbert’s dedication to the land began early. At age six, she spent a summer with her grandparents on their farm, now known as Native Earth. For a time, his grandparents lived in Spain trying to become impressionist painters, but returned to the United States at the start of the Spanish Civil War. Her grandmother recognized that the couple were not going to get rich being artists and was determined to grow her own food. They bought what was considered a worthless and bankrupt sheep farm from Captain George Fred Tilton, one of the last whalers.

Her grandmother encouraged young Rebecca to learn about plants through scent and their details. That first Chilmark summer, she learned to identify sassafras, wintergreen and mint, and used plantain as a dressing.

As a high school student, she attended the first Earth Day event, venturing to Boston Common from her family home in Newton. She moved to the vineyard full-time in the early 1980s, but didn’t know what to do with her grandparents’ farm until she met Randy Ben David, an island farmer looking for a job. a place to keep your pigs. They combined their knowledge and their lives, transforming Ferme Gilbert and growing vegetables and raising farm animals.

Soon people started asking to bring their children to see the animals and so teaching became part of what Ms. Gilbert and Mr. Ben David offered at Native Earth. The farm and school officially opened in 2002.

But the plants remain in the center of the farm.

The first plants she teaches are those whose uses are the most general and the easiest to identify. 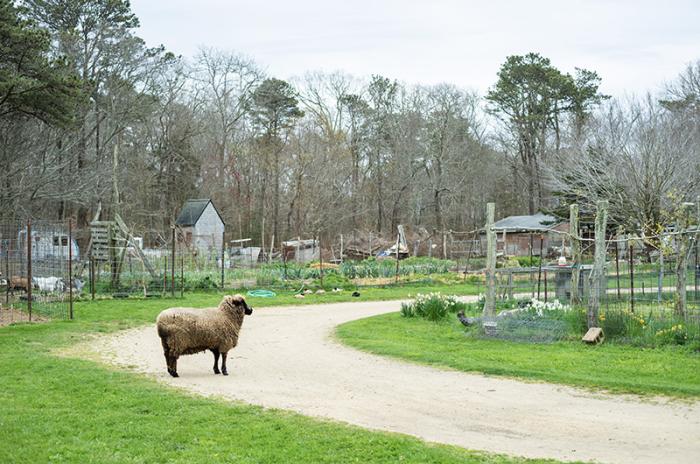 Keep it wild on the farm. — Ray Ewing

“I strongly believe in getting to know a plant for a while before you really start using it in many ways,” she said. “If you follow it through its lifecycle and watch it evolve, you’ll know it well enough to feel comfortable using it.”

This includes eating what you find. Long before picking became popular, Mrs. Gilbert knew she could go out into her yard and cook something for dinner from what she found there.

“Almost every culture has a history of weed consumption,” she said. “Every tradition has something you do with invigorating, fresh greens that come in the spring. I like looking for food because what I find is better than what I can find at the store. It’s fresh and nutritious. Foraged food acts differently on your body than something grown in California and packed in a nitrogen bag. It’s more nutritionally dense, so you feel satisfied.

She anticipated treats for the spring season, including dandelion fritters, nettles and edible flowers.

Ms. Gilbert feels that taking care of farm chores every day gives her time to think deeply. She says she is concerned about supply chain issues, farmworker rights and chemical spraying. She compares invasive plants to invasive crops that colonize. She reflects on how the plant, animal and human worlds are interconnected, and the impact these connections have on each other.

And when she’s troubled, she finds answers in plants, she says. Humans, she thinks, should learn more from weeds.

“One of the definitions of a weed is a plant with a good survival strategy,” she said. “Adaptability makes plants able to evolve in ways that we as a species must learn to do.”