TERRIFYING footage shows the moment a pack of orcas rip apart a great white shark, filling the water with blood.

The great white has been mauled by killer whales forcing the huge sharks out of their natural habitat, scientists have said.

The television lore first premiered on July 17, 1988, and has since become the longest-running cable television programming event in history.

While filming for Shark Week in South Africa, a drone camera captured the violent moment a pack of killer whales attacked a great white, the Daily Beast reported.

The video shows a gargantuan killer whale ripping through the shark’s liver, spilling blood into the ocean waters as two other orcas circle the scene menacingly. 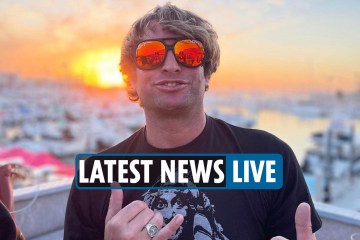 It’s the first time something like this has premiered on Discovery, and one shark scientist thinks viewers are going to go wild over the segment.

“I really think once these images get out there they will go viral,” said South African scientist Alison Towner.

“It’s probably one of the most beautiful pieces of natural history ever filmed.”

The stunning video is also crucial evidence that supports a scientific theory explaining the migratory habits of great white sharks.

Some scientists believe the sharks may actually be running away from groups of orcas that have just hunted the beasts.

Towner, who has studied the ecology of great white shark movements for 15 years, told The Daily Beast that Mossel Bay in South Africa has seen a recent decline in shark activity.

The area has traditionally been an aggregation site for great whites, but the famous predators are mysteriously disappearing.

The shark specialist said he got some pretty compelling evidence that killer whales targeted great whites, and this new footage confirms long-held suspicions.

“We have all the evidence that killer whales are responsible for killing white sharks,” Towner said.

“But this is the world’s first drone footage of killer whales hunting a great white shark.

Shark carcasses with missing livers have washed up on shores, proving that other beasts have suffered the same horrific fate as the recorded victim.

“This is the first time in South Africa that this has been documented as direct evidence,” Towner said.